A static VAR compensator(SVC) is a set of electrical devices for providing fast-acting reactive power on high-voltage electricity transmission networks.[1][2]

Prior to the invention of the SVC, power factor compensation was the preserve of large rotating machines such as synchronous condensers or switched capacitor banks.[5]

The SVC is an automated impedance matching device, designed to bring the system closer to unity power factor. SVCs are used in two main situations:

·         Connected to the power system, to regulate the transmission voltage ("Transmission SVC")

In transmission applications, the SVC is used to regulate the grid voltage. If the power system's reactive load is capacitive (leading), the SVC will use thyristor controlled reactors to consume VARs from the system, lowering the system voltage. Under inductive(lagging) conditions, the capacitor banks are automatically switched in, thus providing a higher system voltage. By connecting the thyristor-controlled reactor, which is continuously variable, along with a capacitor bank step, the net result is continuously variable leading or lagging power.

In industrial applications, SVCs are typically placed near high and rapidly varying loads, such as arc furnaces, where they can smooth flicker voltage 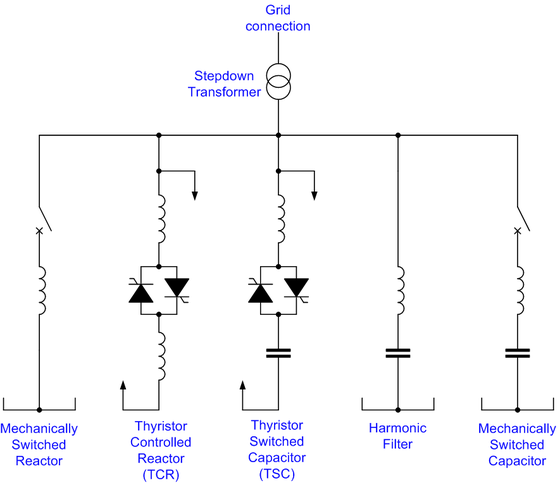